Growing up in a society that probably does not rightly embrace its natural endowments in terms of the natural grandeur and beauty is one of those things I have lived to outgrow by taking the initiative of getting to ‘Know my Country’ and thereafter bring it closer to some people that may be in a seemingly similar situation.
Growing up in the South-western part of Uganda between 1992-1999 created one of the most profound memories at the time, speaking the local language (Rukiga) with it’s click sound amidst our peers in greetings like ‘Agandi‘ literally meaning How are you?, Walking to school in huge amounts of fog with visibility almost zero, and of course enjoying the delicious ‘Emondi‘ (locally meaning Irish potatoes) developed amazing childhood memories. Surprisingly along the way, the society somehow presented to us our motherland (Uganda) as a hostile environment with poverty being the order of the day, the rate of crime and somehow as kids growing up we were led to believe that probably Europe, America name it is better than our own continent, Africa.
However, going back to the land that brought me up after over 20years created a new me with a completely renewed perspective of my motherland and I have vowed to share its beauty and reaches via the blog.
One of those features you can lose sight of is Lake Bunyonyi with close to 29 Islands that are like the icon on the cake, the lush-green terraced hills that make you crave for Eden beauty, the different bird species like the Kingfisher, the reptiles like crocodiles, towering giraffes to mention but a few. It is believed that on one Island The Punishment Island was designated to punish girls that had gotten pregnant before marriage coz they were viewed as a disgrace to society. A girl would be taken to the Island and left there to die of hunger or even drown in case they attempted to swim across the deep waters because even swimming techniques were rare. 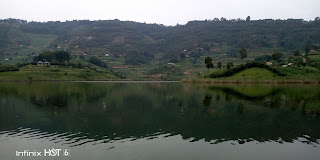 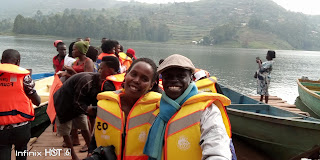 Getting ready for the cruise

Winding up my nature expedition in Kabaale got me interract with the Encyclopedia of the land who is and elderly gentleman close to 95 years of age who has with much effort preserved the culture and heritage of The Bakiga in books and various literature in the local dialect. Some of the penned down stories are those related the traditional marriages, traditional songs and of course the origin of The Bakiga.


Having been brought to the attention of the land of Kabaale and it’s beauty, nothing would stop me from attesting to the name itself of The Switzerland of Africa.
After creation, God saw that all He had made was good according to the creation account in Genesis 1.
The Psalmist


I will lift up my eyes to the hills-From whence comes my help?
My help comes from the Lord, who made heaven and Earth.
Psalms.121:1-2

Isaac Obwala
I am an Accountant and so passionate about nature. Was born in Kabale Southwestern Uganda a place naturally endowed with nature in its beauty. I show God to the world through nature having been inspired by one scientist and Biologist Dr. Tim Standish the director of Geo-Science research institute having met in one conference about Faith and Science. Currently based in Bugema, Kampala-Uganda.